skip to main | skip to sidebar

The Silent Holocaust: The Belgian Genocide of the Congo

In our reflection upon the grand history and innumerable events of humanity’s past we are inevitably forced to once again encounter the horrors and inhuman transgressions that our forebearers have made against others as well as the transgressions that have been made against our forebearers by others. In contemporary history there is perhaps no event more horrid and incomprehensible as the Holocaust. Following the rise of Adolf Hitler and Nazi Germany, his Aryan Ideal was put forth with unforeseen adamancy. To better facilitate the securing of Germany (and eventually continental Europe) for Aryan people, his racial agenda called for the elimination of untermenschen (subhumans), most of whom were, in Germany, Jewish people. Over the duration of World War II (and preceding this conflict) Hitler and his Aryan henchmen facilitated the mass elimination of nearly 6 million Jews. In addition to this, 4 million Slavs, Poles, and rarer minorities such as blacks were systematically eliminated. While the Jews were obviously not the only victims of the Holocaust or the mass German onslaught against those they deemed enemies and inferiors, the incessant memorials to this heinous and savage crime have characterized this event as one that has solely affected Jews. The term “Holocaust” has become effectively synonymized with “Genocide of Jews” although this is highly inaccurate and extremely disrespectful to those of other faiths and ethnicities who also died at the hands of the Nazis, the label “untermenschen” seared into their corpses.

One may often wonder why the plight of the Jewish people has become so well known, so mourned over, and so thoroughly impressed into the global collective consciousness. Why have so many, even the ancestors of those who perpetrated the heinous acts against the Jewish people, shuddered at mere thoughts and reflections of the brutality and callousness expressed by the German people towards their scorned Jewish enemies? And why is it that the innumerable casualties of Africans, Native Americans, Asians, and virtually all non-white ethnic groups of the world are deemed unworthy of tears, mourning, and remembrance. For them, a mere “sorry” must suffice for the tens of millions they lost, and the plight and suffering of their ancestors is merely swept under the rug, cast into oblivion---forgotten. While our school textbooks devote entire chapters to the subject of Jewish suffering, especially the Holocaust, other genocides, such as that of the Congolese, have not merited even paragraphs.

In the West, they never fail to remind us of the plight of the Jews and the extreme, gory adversity that they have ostensibly endured throughout the history of man. Holocaust memorials are erected, dates are observed, reparation money is distributed to the victims and their descendants, nations are commandeered and offered as polite compensation. As for the memory of the millions of blacks who died en route in the Atlantic Slave Trade (not to mention their brethren who died either tilling fields or being beaten to their demise), the millions of Native Americans who died throughout the Americas after the arrival of Europeans, and the millions who died at the hands of European colonialists in Africa, there is no memory. There has been no effort to mitigate the residual effects of the atrocious acts, no effort to appease the disturbed and restless spirits of those wronged. Memorials are few, acknowledgment is scant, and nowhere are apologies to be found. “It wasn’t me who did it---it was those people back then.”

During the mid-19th century the infamous Scramble for Africa was at its pinnacle. Every European superpower that was anything readily and enthusiastically partook in military conquest of African nations. Though several sovereign African states proved themselves formidable and presented valiant reciprocation of European aggression (most notably the Zulu, Asante, Herero, and Ethiopians) most African states succumbed to European belligerence rather easily. European technology, political impetus, and a most rabid and feral type of aggression were simply too much for most Africans to resist. And so, upon Mother Africa, colonialism was imposed with great ardency, and for the first time Africa was under the yoke of Europe. It was unprecedented.

In 1885, King Leopold of Belgium surveyed a map of Africa and tacitly observed the 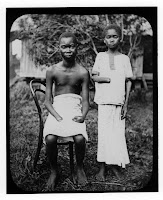 territorial highlights of nations that had been conquered by his continental cohorts. He was less than satisfied at the many possessions of Great Britain, the foremost Empire of the world, as well as those Germany, France, and Italy. Both a sense of envy and consternation overtook him. If Belgium could not conquer African territory then its status as a legitimate European power bastion would be thereby threatened. Before his eyes, all of his rivals were declaring war on African people throughout and acquiring territory, slave labor, and abundant resources. Hell bent on capitalizing off of the violent exploitation, King Leopold appealed at the Berlin Conference of 1885 and was granted the territory that would become the Belgian Congo (now the Democratic Republic of the Congo). The Congo was unbelievably wealthy---her jungles, soils, and wildlife abounded in rubber, ivory, and minerals. King Leopold’s personal army, the Force Publique, was swept up in a desirous frenzy to acquire this wealth that by 1908, when European powers actually had to retake the Congo from Belgium because of the gross genocide and carnage that had been wrought, it was conservatively estimated that over 10 million Congolese had died. That would be around 50 percent of the Congo’s population, an undoubtedly astounding amount. It is often contested that these estimates are grossly inaccurate and in reality a figure significantly higher than 10 million would be more fitting to account for these gross tragedies.

Like the nations controlled by his relatives, King Leopold II was transfixed upon the idea of white supremacy and white colonial domination. To impose European control upon Africa, they would stop at nothing. King Leopold not only extracted tremendous amounts of wealth from the land and henceforth bolstered the economy of Belgium (as well as his own personal wealth) but he did so through enslavement of almost all of the native populace. To King Leopold, these Africans were “subhumans” and “savages” and “life not worthy of life”. Each and every Congolese soul who perished at his behest was victim to a man who assigned absolutely no value or worth to the lives of Africans. To him, their lives may as well have been nothing---animals exceeded them in significance. King Leopold was a man who believed wholly (and shared this belief with many of his European colonizing cohorts) that the value of white life was infinitely greater than that of a black life. After all, beyond labor or sexual satisfaction, the black life had no true worth.

If the black inhabitants of the Congo were “noble savages” then it is only fair to christen their Belgian masters as “savage nobles”. Though the whites characterized the Africans as primitive, feral, and less than human, closer to simian creature, it was not the Africans who committed savagery and animalistic barbarity upon “cultured” Europeans. King Leopold’s henchmen utilized almost every known form of torture and punishment to murder Congolese people. Congolese were beaten, shot, beheaded, burnt to death, hung, starved, stabbed, impaled, infected with disease, and whipped to death. Those who didn’t die from the cruel punishment often endured lifelong injuries such as castrated genitals, severed limbs, severe burns, loss of eyes, and permanent scars from whips. Those who managed to remain physically unscathed still endured the pain of slave labor and the psychological torment that such an imposing and cruel slavocracy imposed upon them. No man was free from the yoke of King Leopold’s fierce, callous oppression, and every single inhabitant of the Congo was in some great way victim to the bloody subjugation. Contending with more conservative, doctored estimates, some estimate that up to 30 million Congolese perished during the brutal regime of King Leopold II as a direct result of his vicious efforts. 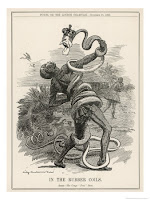 n the Congo? Who is to dictate what tragic transgression is worthy of eternal commemoration and which one should merely be cast into oblivion? As Africans, perhaps we should blame ourselves for not calling for remembrance of these atrocities. Of course the perpetrators and the descendants of the perpetrators are going to try their best to eradicate all memory of these horrid transgressions---in their aversion to altruism, honor, and humanity, they would rather deny responsibility and tarnish the memory of these brave individuals who endured so much but inevitably succumbed, than concede wrongdoing. In a most audacious and affronting statement, Christoph Muzungu, the culture minister for the Democratic Republic of the Congo, advocated the erection of a statue of King Leopold II. Oblivious to the fact that millions upon millions of his countrymen were murdered by this bloodthirsty despot, likely some of them being his familial ancestors, he argued that, “people should see the positive aspects of his rule.” The Congolese people, a bit more aversive to the memory of such a savage tyrant, immediately dismantled the statue within hours of its erection.

Are our ears closed to their never-ending cries and screams and pleas that will forever echo throughout history?

Mothers and fathers, brothers and sisters! When will we REMEMBER the plight of our ancestors? Will we remain oblivious and ignorant to their anguish forever? Hear their cries!

Posted by blackthought at 5:30 PM